Scripts for voiceover usually go through several rounds of edits and 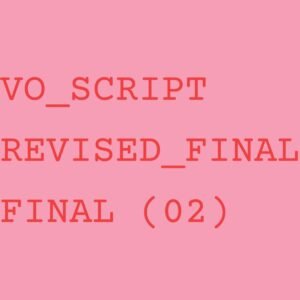 approvals before they’re ready to record. There are clients, producers, writers, project supervisors, legal department staff, and of course, The Big Boss, all needing to sign-off on every word.

Sometimes the voiceover artist will even see an early version or two as part of quoting and preparation for the project.

This means there will be several versions of a script floating around many people’s emails, drives and devices.

Hopefully, they’re named something better than:

Confusion about which script is (actually) the final one can cause stress during live sessions. The client has THISONEISFINAL.doc but the director has revised_FINAL.doc and was told that THAT was it. Meanwhile, the voiceover artist has final_FINAL.doc. One whole paragraph is different and the company name has been inexplicably changed.

Wait, what? Can someone message Legal real quick and check what the name is supposed to be? Um, meanwhile, let’s just do a version of each.

No worries, says the voiceover gal, of course, being the flexible and fabulous professional that she is.

But then two days later, Legal replies that neither option was correct, and can we please do another one – just those three sentences will be fine.

Of course! But this is all costing time – and therefore money. The company now needs to pay an extra revision fee and the producer has been held up putting all the pieces together.

If there’s no live session, meaning the VO is self-directing the recording in their own schedule, the same problems can occur in a different timeframe. There’ll be lots of confused or questioning emails, and annoying delays.

I recently received a medical eLearning script. I recorded it the next day (because fast turnaround is my jam, baby) and was about to begin editing, when an email came through from my client (the eLearning designer): don’t record yet, I’ve just been told one more person needs to review the script. (Never mind that who knows how many people from every conceivable department had already reviewed it!) Well, sure, I say through gritted teeth (can you write polite, friendly emails through gritted teeth?); it’s already done though, so let’s hope they don’t want to change much!

Thankfully, the reviewer came back with NO changes so all it cost was a few days’ pause and a little uncertainty. But that’s the kind of mishap to throw off a project’s budget with an extra session fee ending up on the invoice.

Of course, these things are going to happen. There will be missed emails or last minute changes, and we’re all just going to deal with them like the delightful professional voiceover darlings we are. But it only takes a little question or two to avoid them MOST of the time:

In the comments, I would love to hear the most ridiculous VO script file name you’ve seen! How many variations were there? 😂