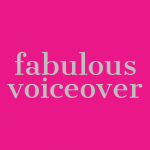 Hello fabulous friends! Did you notice the website is all newly bright and shiny and rejuvenated? Go have a look around, I’ll wait…

And yay for my darling partner, the IT superman, who has made the website pretty, fast and fabulous for me and my fabulous voiceover.

So, I wanted to share some fun character and creative stuff I’ve been up to. In March, I joined in a creative voiceover competition called Now! Voice! This! run by Chuck Huber over on Twitter. It’s the 5th year of the competition and my first time participating. Chuck throws out a prompt and voice actors create a 30-60 second piece of audio.

The prompt for the first round was “Audition” and there were a few thousand entries. I was immediately reminded of a humiliating moment in high school when I was prank-called by a girl from school who convinced me I was being selected for a prestigious choir…

Yes, I really did fall for it, and yes, my singing probably was that bad. But hey, it eventually came in useful, didn’t it? (the prank, I mean… not the singing…)

I was very excited to make it to the 2nd round with about 1400 other voice actors including some of my Aussie and international voiceover friends. The prompt was “Opposite Day”. I tried to think outside the square just a little:

I hadn’t expected to make it to this round, so of course at this point I was very excited and also started thinking I was brilliant and was probably going to win. (Seriously, all those Oscar-winning actors who say “I never dreamed I’d win an Oscar”…. Nope. Just nope, we don’t believe you.)
So, I don’t know what I would’ve thought if I hadn’t made it to Round 3, but I did! At which point I remembered I’m not at all brilliant and tried to remember how to even speak coherently let alone come up with a 30-60 second piece of creative voiceover…

The prompt for the 400-ish Round 3 voice actors was “Socially Distant”, and this is what I came up with. (At the eleventh hour!)

There was what seemed like a loooong pause at this point. I felt like I was waiting for weeks for the next round announcement. Chuck Huber finally posted that he was going to livestream announce the next round, which would be the semi-final. Chuck was chatting away live and made a big “moment” of clicking something on his computer, saying he was sending the emails out to semi-finalists. Everyone watching the livestream checked their emails and for the next 10 minutes the comments were mostly confusion while NOBODY got an email. Eventually, realizing that that was a little weird, Chuck checked his mailchimp account and admitted “oops, the mail campaign was paused”. Sigh of relief from everyone as emails started arriving!

Anyway, yes, long story short, I made it to the semi-final round! I am tremendously proud of myself getting to the top 180 contestants in my first year of participating. The prompt was “Free Space”. Definitely the hardest prompt so far! I was inspired by Australian politics…. (in case you don’t know, at this time the Australian government was releasing CovidSafe, a “contact tracing app” that it hoped would be downloaded by at least 40% of the population. Statements along the lines of “we hope we won’t have to make it mandatory” were thrown around…)

After another nail-biting wait, the 25 finalists were announced. I wasn’t one of them, but I’m super proud that there are 3 Aussies in there – Aimee Smith, Brendan Barry-Cotter and Candice Faith. And the prompt sounds like great fun – “A Scottish Dwarf, a proper British Vampire and a Monster”!

The entries I’ve heard so far are amazing, with people learning new accents and making up some crazy stories. Do yourself a favour and go to this twitter thread to see the finalist entries.

The two winners will be announced on Thursday evening, US Central Time. Exciting!